Kings of Queen have one vision: to bring an electrifying performance of all your Queen favourites. After the all-on-stage anthemic finale, you’ll be in rhapsody over the unmissable Kings of Queen show!

Kings of Queen will rock you as they champion the music of the legendary Freddie Mercury and Queen. Leaving a kind of magic with their powerhouse voices, Carne, Ryder and Watson are backed by an all-star band that will have you going ga ga over a slew of killer Queen hits.

Scott Carne is the lead singer of Kids in the Kitchen, the 80s ‘new wave’ band. Their Double Platinum selling debut album Shine yielded five Top 10 singles, including Current Stand, Something That You Said, Change in Mood and Bitter Desire. Kids in the Kitchen supported Culture Club on their 2016 Australian Tour. The consummate frontman, Scott has been entertaining audiences for more than 30 years.

Chris Doheny remains one of Australia’s foremost live performers. His musical history extends from the latter part of the Seventies to the present. His career has been highlighted by fronting leading Australian 80s rock act Geisha since the Eighties, Releasing 9 albums & 14 singles over their career, with multiple top 40 Hits singles including “Kabuki” & “Part Time Love Affair” just to name a few. He is also renowned for his award-winning performance for “More Than A Game”, the theme song for the Melbourne Footy Show since its inception in 1994. Chris Doheny continues to captivate audience everywhere with his huge operatic voice & charming stage presence

Tim Watson is the lead singer of Taxiride, who released their debut album Imaginatein 1999, which went double platinum. This was followed by 2002’s Garage Mahal, which went platinum. Their hit ‘Creepin’ Up Slowly’ reached number 6 on the ARIAs chart in 2002 and their 2005 single ‘Get Set’reached number 8. Tim rocks every performance, commanding the stage and thrilling audiences far and wide.

To book the Kings of Queens tribute show contact kingsofqueen@popshop.com.au.

Bohemian Rhapsody We Will Rock You Don’t Stop Me Now Another One Bites the Dust Somebody to Love I Want To Break Free We Are the Champions Killer Queen Crazy Little Thing Called Love Radio Ga Ga Fat Bottomed Girls You’re My Best Friend Under Pressure Tie Ya Mother Down Keep Ya Self Alive It’s a Hard Life I Want it All Save Me A Kind Of Magic Play the Game Hammer to Fall One Vision
Play the Game I’m in Love with My Car & many more! 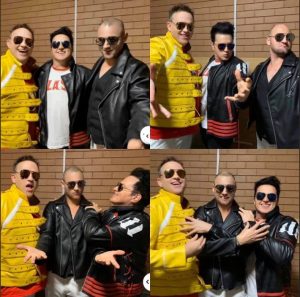 Keep up to date on upcoming Kings of Queen tribute shows on Facebook.